Early last year, at the height of the Covid-19 pandemic, Selligion Technologies co-founders Naman Chakraborty, Yoshita Sengupta and Joby John observed how smartphones that initially promised to close the Covid learning gap for kids were far from being the computer replacement they thought it would be. This led to the idea of developing “Praho”, a cloud-based kid-friendly computer that will be available for a monthly subscription fee before the end of the year, lowering the entry barrier for consumers by subsidising the cost of hardware.

“Indians may not pay for one app but they have been paying for cable TV since the 90s and then they switched and did that for Tata sky,” COO Sengupta explains the rationale behind the subscription-based model for Praho and why it might work in India. “I don’t think the subscription model has a problem in India as long as a service or a product offers value for money,” she told indianexpress.com in an interview.

Praho has a square base and triangular sides. (Image credit: Selligion Technologies)

The consumer PC market is crowded, but the Mumbai-based startup is betting on a unique sales pitch that it hopes will become a trendsetter and expand the penetration of PCs, among the lowest in the world. The company will charge Rs 399 a month to allow people to subscribe to a computer. They, however, would need to pay Rs 3600 as a one-time payment as caution money.

In the consumer electronics space, the subscription model is still new and something many companies don’t do. GoPro has tried the model and the early reception has been encouraging. But Sengupta believes they are solving a larger problem of “mainstreaming” PCs which hasn’t happened in India despite promises made by PC brands and chipmakers in the past.

It’s fair to say that for a lot of Indians a smartphone is the default computing device due to the accessibility offered by affordable mobile data plans and the dropped cost of hardware. “People who have a smartphone, don’t have a computer because they can’t afford it. Not because they don’t want it,” John chips in, adding that price point is the biggest barrier which is stopping an average Indian consumer from buying a PC. 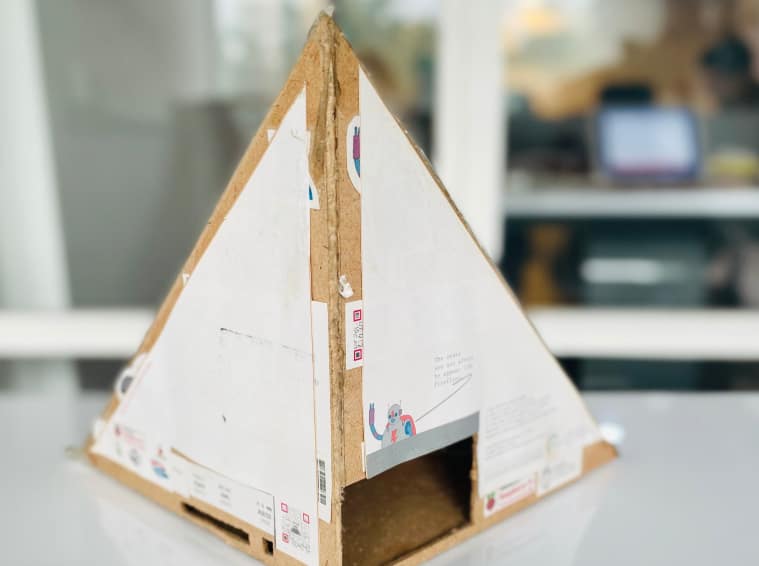 The question of why PCs haven’t taken off like smartphones in India has been left unanswered for a decade now. Sengupta says the smartphone boom since 2017 was because Reliance [Jio] understood the price processing of an average Indian from a budgeting standpoint. “The problem here perhaps is the fact that the entry-level barrier is Rs 20,000 which may not work for a parent who needs to choose between a tutor coaching plus education fee plus bus fare plus uniform,” Sengupta said.

She hopes a monthly model where the customer gets to pay a single fee and get access to the computer is what is needed to bring computers to the masses. “All we are doing right now, to begin with, is reducing the entry barrier and the exit barrier to Rs 399,” she added.

” id=”yt-wrapper-box” >
Work on Praho began when Chakraborty created the first prototype of the device on cardboard after the second lockdown. The device’s current form is triangular and Sengupta says this might change when the PC starts becoming commercially available. The computer is 20 centimetres tall and weighs just 175 grams. Chakraborty wanted their first consumer computer to look different, something Jony Ive also did when designing the iMac G3  which was more of a statement with its translucent see-through plastic design. “We wanted to differentiate in terms of visibility; it’s literally like shelf space in a supermarket,” says Sengupta on why Praho has an unconventional design. In the initial design phase, Chakraborty and his team worked on multiple prototypes and tried out different materials. “We hand drew the device, cut it out of particle board and made a version,” she says. But a parent’s feedback was that the edges were too sharp for a kid to handle the device and Sengupta admits not everyone liked it. The team was back on the drawing board, this time with the intention to make the device child-safe.  The team then got a 3D-printed prototype in Goregaon at a cost of Rs 4 lakh.

Sengupta and John are reluctant to disclose the processor that will power Praho due to the ongoing semiconductor shortage which has made it really hard for companies to procure chips at scale. Internally, the startup has been testing Praho with a Raspberry Pi, which is a great embedded computer board for education and prototyping. “Raspberry Pi has had a supply chain issue, and they’re not very regular with how much they manufacture,” she explains, adding that the company is already testing the device with different Single Board Computer (SBC) manufacturers and suppliers. The prototype version of Praho made out of MDF pieces. (Image credit: Selligion Technologies )

On the software side, things get really interesting.  “We have piloted two versions of Praho, one has a custom Linux OS in the local machine, which can work without the internet. Then we wanted to see the reaction to Windows Cloud OS,” reveals Sengupta

But what does a cloud-based computer really mean? “Put your phone number, receive an OTP and get onto a Windows Cloud Device,” she puts across the process in simple terms. But John admits there are challenges to a CloudOS, which is a double down version of cloud that relies solely on the internet which could be a problem in a market like India. “A Cloud service operating system is not what India or we want to build, we want to first make sure that the device works, is easy to use, and isn’t expensive…

The true cost of using a cloud-based computer versus an entirely offline PC for a day is completely different,” he adds.
Sengupta and other co-founders at Selligion Technologies have taken up the challenge to design and build a computer from scratch when there are barely any local PC brands left in India.

“Getting into hardware is a capital-intensive business,” admits Sengupta, adding that it can be a challenge to convince VCs and secure funding if you are making hardware in India. “Building hardware is not sexy from an investment point of view; it’s not very quick, in terms of scale that’s what they [VCs] believe,” John adds.

Polygon Crypto Price: Investors Are Rapidly Turning to These Alternatives Instead

The demand for specialised fintech developers is rising

The demand for specialised fintech developers is rising

Twitter is breaking in India, Indonesia, and other countries.

Caroline Ellison, one of the central figures behind FTX’s collapse, previously tweeted that regularly using amphetamines made the ‘non-medicated’ life seem ‘dumb’

ADVERTISEMENT
No Result
View All Result